Kevin Bunch posted the following to the Astrogroup subforum on AtariAge:

“For any enthusiasts who are going to Magfest or live on the east coast, Rachel Simone Weil and I will be running a history panel all about the independent developer/enthusiast scene that cropped around the Astrocade! Obviously quite unique for a game console to have vastly more unofficial, “bedroom coder” style software releases than official ones, and having enthusiast-developed and sold hardware is similarly incredible. We’ll be talking about how this scene coalesced, the kind of unique, even artful programs that were created, how it petered out, and if there’s time, even a bit about the current state of homebrew development for the platform.

“I also plan on bringing my Astrocade to the museum area and having it set up to play immediately following the panel with some BASIC games and homebrew/indie stuff on the ultimulti. Magfest is Jan. 2-5 in National Harbor, Maryland, and the panel itself will be recorded and posted on YouTube in the weeks following the event.” 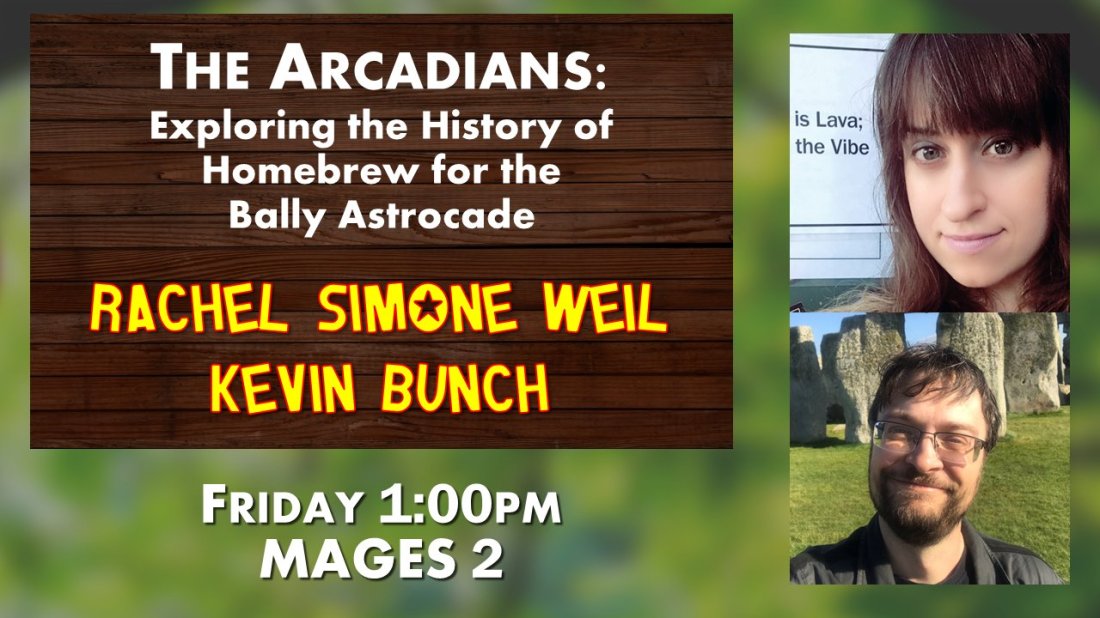 In a private email to me, Kevin gave me a bit more information:

“So about the talk. It’s taking place at MAGfest in National Harbor, Maryland on January 3, and is titled “The Arcadians: Exploring the history of homebrew for the Bally Astrocade.” Rachel and I will be talking about the development of an independent developer scene around the Bally and how the support from fans kept the machine alive and going even when Bally and Astrovision were struggling – something rather unique for a game console. Since this aspect of the platform was unemulated until recently, it’s a perfect opportunity to talk about and showcase some of the interesting art and music programs and games created using the BASIC carts as well, including ones that commentate on then-current events and worries. I also plan on bringing my Bally along to load up some BASIC games for folks to try in the MAGfest Museum after the panel.

“Since last year MAGfest has had a dedicated game history panel track, where they bring in game historians to discuss interesting topics and items of research they’ve been delving into. I would also like to note that another history panel going on that day, presented by Whitney Pow and entitled “The Glitch: Queer and Transgender Video Game History,” will discuss Jamie Fenton’s contributions at length, including her video art projects. I’ll attach an image of the game history panel track schedule below.”

You can read more about the Magfest, here:

Good luck to both Kevin and Rachel on their talk!

I'm a fan of classic video games. Unusual systems, like the APF MP-1000, the Emerson Arcadia 2001 and the Bally Arcade/Astrocade fascinate me the most. I've always been a science fiction and weird fiction fan, but recently I've been introduced to the work of some authors in the weird genre (Machen, in particular) who are leading me to seek-out more unusual writing than the sometimes overly-loved Lovecraft. He was a shining (dark) beacon in his field, but he truly did follow in the footsteps of others, as he himself seemed to understand. View all posts by BallyAlley